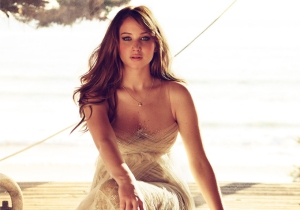 A few weeks ago, I told my boyfriend of six years that I was in love with a girl. He laughed at me and asked what the hell I was talking about. I told him I was in love with Jennifer Lawrence and there’s nothing he could do about it. This was the night after the 2013 Academy Awards.

I was first introduced to Jennifer Lawrence at the Oscars in 2011. Who could forget the blonde bombshell in the smoking red Calvin Klein number? The next time I saw her, she was in one of my favorite comic-based movies of all time: X-Men First Class. Jen did a fabulous job as a young Raven/Mystique, considering she was filling a very giant pair of shoes left behind by Rebecca Romijn. What I enjoyed most about Jen’s Mystique was her vulnerability, and her ability to portray a quiet but powerful transformation from Raven to Mystique. When she left Charles to join Magneto, you felt as if she was no longer the young girl in Charles’ kitchen but a dangerous woman, and I was ecstatic to hear that we will see this Mystique in the upcoming sequel.

I decided then to watch Winter’s Bone and to see why she had been nominated for an Oscar. That movie was PHENOMENAL. I was not expecting to be so connected to Ree so quickly. But Jennifer Lawrence made you connect with this young girl in such a profound way. I think this movie is so underrated. It is raw and gut-wrenching, and shows you a very real side of America; a side most people try to forget exists. After I saw this movie, I knew that this actress was legit. When she was announced to star as Katniss Everdeen in the film adaptations of The Hunger Games, I jumped for joy. I knew that Jennifer Lawrence would be the perfect actress for the role, and it proved to be shockingly fitting. I have yet to see Silver Linings Playbook, much to my regret, but I think her Oscar success is proof enough of Jen’s amazing talent.

Despite all of my J-Law love towards her acting, it wasn’t until I saw her post-Oscar interview that I realized the extent of my girl crush. In her glorious moment of victory and success, Jen decided to mention a topic that some actors and actresses would never dare to discuss. She talked about mental health issues, and the very real fact that mental illnesses exist and that people should treat them as they treat any other illness. But, because of an assumed stigma associated with mental health treatment in our society, the topic is avoided like the plague. But J-Law confronted it in a press conference following a worldwide event. She took a clear stand, and did so poignantly and with grace.

I love this girl because in the same interview, she belittled herself, flipped the bird in front of the camera, and admitted openly to taking a shot before she walked on stage. This girl is fabulous because she is real. She is more real than anyone in Hollywood and she doesn’t try to hide her humanity and her flaws from everyone. And, not only is she real, but she is beautiful! And she is beautiful in her own body. She may be a size 4, or, god forbid a 6(!), but she is smoking hot. Not to mention, she’s funny!

So, my question to anyone who wonders why I’m in love with Jennifer Lawrence is, what’s not to love?

4 thoughts on “My girlcrush on Jennifer Lawrence”