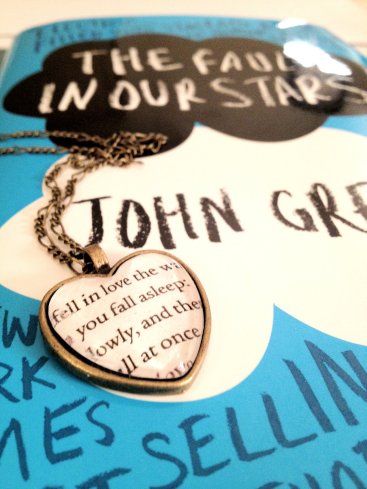 “That’s the thing about pain,” Augustus said, and then glanced back at me. “It demands to be felt”

“The Fault in Our Stars” follows the story of Hazel Lancaster, a teenage girl living with thyroid cancer that has spread to her lungs.  Because of this, Hazel lives her life knowing that her time is limited, “Some infinities are bigger than other infinities.”  In a support group for cancer kids in Indianapolis, Hazel meets August Waters, a former basketball player who lost his leg to osteosarcoma.

Their relationship blossoms into young love when Augustus lends Hazel his favorite book, “The Price of Dawn,” a novelization of his favorite video game.  In return, Hazel gives him hers: “An Imperial Affliction” by Peter Van Houten, which follows a teenage girl diagnosed with cancer.  Van Houten ends his story abruptly mid-sentence with no conclusion.  “That’s part of what I like about the book in some ways. It portrays death truthfully. You die in the middle of your life, in the middle of a sentence.”  Hazel is obsessed with finding out the end to the story and Augustus, too, becomes obsessed with the missing conclusion.  They quickly bond over this and Augustus generously decides to use his “wish” from “The Genie Foundation” (Make a Wish Foundation), to send himself and Hazel to Amsterdam to interview Van Houten.  Hazel used her wish during the lowest point of her battle with cancer to go to a Disney theme park.  “Oh my god,” says Augustus “I can’t believe I have a crush on a girl with such cliche wishes.”

The beauty in this story lies in the realistic interpretation of what it’s like to be a kid with cancer.  The most riveting part of the story, for me, was when Hazel tries to prevent her inevitable relationship with Augustus.  “I’m a grenade and at some point I’m going to blow up and I would like to minimize the casualties,” she declares.  Augustus, of course isn’t having that.  At first, he seems too good to be true.  He’s charming and smart, and seems to really care for Hazel, or as he refers to her, Hazel Grace.  As the story continues, we quickly understand that Gus’s illness has led to his deep investigation into the meaning of life and death.  For example, while in Amsterdam, Hazel and Augustus are treated to a fancy dinner by Van Houten’s assistant.  Augustus shows up in a sharp looking suit and he explains, “When I first found out I was sick–I mean, they told me I had like an eighty-five percent chance of cure.  I know those are great odds, but I kept thinking it was a game of Russian roulette.  I mean, I was going to have to go through hell for six months or a year and lose my leg and then at the end, it still might not work, you know?  So I went through this whole thing about wanting to be ready.  We bought a plot in Crown Hill, and I walked around with my dad one day and picked out a spot.  And I had my whole funeral planned out and everything, and then right before the surgery, I asked my parents if I could buy a suit, like a really nice suit, just in case I bit it.  Anyway, I’ve never had occasion to wear it.  Until tonight.”

Over the course of the novel, Green’s writing through Hazel’s narration is witty, funny, and a bit melancholy.  For example, Augustus frequently places a cigarette in his mouth throughout the story but never lights it.  When asked why a kid with cancer would make his situation worse with a cigarette he explains “They don’t kill you unless you light them.  And I’ve never lit one.  It’s a metaphor, see:  You put the killing thing right between your teeth, but you don’t give it the power to do it’s killing.”  It was the wit and directness of Green’s storytelling that kept me from saying oh my god, why did I do this to myself?! I’m reading a cancer book! Make it stop!

On that note, unfortunately the story does take a grim turn.  It is blunt about the medical realities of cancer.  There’s no miracle or rainbow at the end, it is a compelling description of pain, anger, and fear.  Green’s realistic portrayal of cancer, including explicit details about bodily fluids, only works to make the story more moving.  Green depicts real love through the eyes of two teenagers “I fell in love the way you fall asleep: slowly, and then all at once.”  The love between Augustus and Hazel is a partnership, and it is accepting, they see each other through humiliating physical and emotional ordeals.  Noah and Allie have nothing on Augustus and Hazel.

The movie adaptation starring Shailene Woodley and Ansel Elgort is currently filming and will hit theaters in 2014.