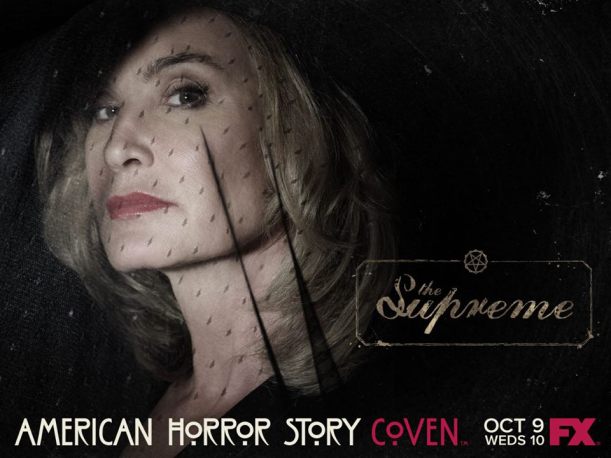 For the last installment of ‘What to Watch this Week’ it was an easy choice.  The writers of RPW have been waiting patiently for the new AHS season since the end of Asylum and rumor has it Ryan Murphy has not disappointed loyal fans.  According to a review by Entertainment Weekly, Wednesday’s episode is the best first episode of all three seasons.  The episode feels lighter and funnier than previous seasons.  Many fans complained during Asylum that it was too “dark and grim and hard.”  I know that I often felt like there was too much.  What else could they throw at me on top of Nazis, the devil, aliens, mental illness, AND a serial killer?  Every episode felt like an exhausting whirlwind.  This season has more comedy and more romance (particularly between season 1 favorites Evan Peters and Taissa Farmiga).  Also, the season was shot on location in New Orleans rather than in a studio, so it feels a little less claustrophobic by comparison.

This season the plot follows Taissa Farmiga’s character, Zoe, a teenager who discovers she’s a witch and is sent by her mother to a very special New Orleans boarding school for witches, Miss Robichaux’s Academy for Exceptional Young Ladies.  The school is run by Cordelia (Sarah Paulson) who has recently reunited with her mother, Fiona (Jessica Lange).  Fiona has returned to New Orleans from LA after the murder of a young Salem witch.  Fiona is labeled a ‘Supreme’ for her magical abilities.  All in all, Fiona is witch royalty, descended from Salem spell casters.

The student body – and bloodline – at Miss Robichaux’s is dwindling.  The current students include troubled teen star Madison (Emma Roberts), tough girl Queenie (Gabourey Sidibe), and enigmatic Nan (Jamie Brewer).  Additionally, the school faces several outside enemies including a voodoo clan and a Tulane frat (Evan Peters plays frat-boy, Kyle).  We are also introduced via flashback to Marie Delphine LaLaurie (Kathy Bates), who’s based on a real-life socialite and serial killer who tortured black slaves in the early 1800s.

Will you be watching?

Thursday, October 10
8/7c
Once Upon a Time in Wonderland (ABC)